What is the risk threshold for worsening Scoliosis? 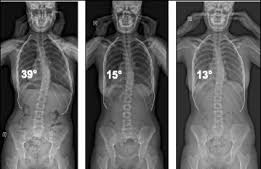 Mild Scoliosis is the most responsive to exercise treatment.

Moderate Scoliosis may be treated with exercise too, but wearing a medically prescribed brace is sometimes recommended as well.

We take action to prevent it from worsening by monitoring it. We use Scoliosis-specific exercises, and if they are not effective and the Scoliosis continues to grow, we have to start a more aggressive Scoliosis exercise or combine it with bracing.

The younger you are when you are first diagnosed with Scoliosis puts you at a higher risk of your spine growing into a more severe curve because your bones have not finished growing . For this reason, we may recommend bracing for younger patients who have not reached the 30-degree threshold where we would ordinarily consider a brace.

If you already have a curve greater than 30 degrees we aim to prevent it from progressing to 50 degrees, which is the surgical threshold.

If Scoliosis is detected early enough there is greater scope for treatment.